You may apply Online for COMBINED GRADUATE LEVEL EXAMINATION 2016

Staff Selection Commission's much awaited Combined Graduate Level (CGL) Exam 2016 Notification, will be announced on 13th Feb, 2016. The Date, is known, now as the SSC Calendar for 2016, is outSSC will release its Annual Examination Calendar for 2016 in the month of September / October on the Official Website of SSC. The SSC Calendar 2016 contains the Complete List of Competitive Examinations and Departmental ExaminationsIn the upcoming posts, we will share the SSC Examination Calendar with you and In this post, we will share each and every thing, you need to know about the SSC CGL 2016 NotificationAs, most of you know, that SSC CGL, is one of the most competitive exams in India and the Best way to get Government Jobs in Central Govt Departments and Ministries, therefore, you must apply for SSC CGL 2016. You can also read our Detailed SSC CGL 2016 Manual and know about each and every aspect of exam

1) Biggest Change : No Interview for CGL 20162) No change in CGL syllabus and Exam Pattern3) There is No mention that CGL-2016 will be an online Exam.4) The Post MEA (cipher) has been discontinued
5) For some posts, the upper age limit is set to 30 years
Important Dates: The Online Registration, will start from 13th Feb and the closing date is 10th March (For Part-1) and 14th March (For Part-II)

What is the Eligibility Criteria ?

If you are willing to appear in the CGL 2016 Exam, then you must full fill the below mentioned eligibility conditions(I) Age Limit: Applicants, must have attained the age of 18 years and their maximum age should not exceed 27 years. However for some posts the Lower and upper age Limit is different and given as under1) Assistant Section Officer: 20-30 years2) Assistant (Intelligence Bureau): 21-27 years3) Assistant Enforcement Officer: Upto 30 years4) Sub-Inspector (CBI): 20-30 years5) Statistical Investigator GR-II: upto 32 years6) Sub-Inspector (NIA): upto 30 years7) Assistant Audit Officer: Not exceeding 30 years8) Sub-Inspector (Narcotics): 18 to 25 years 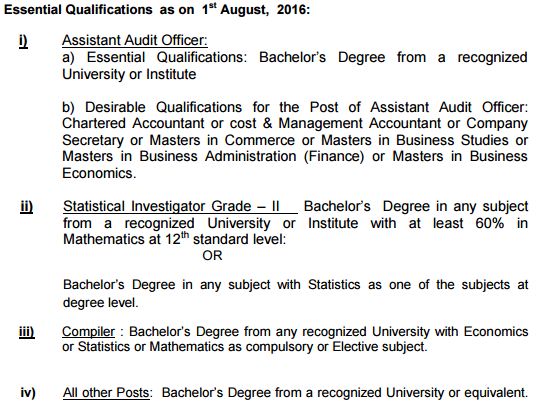 Selection Process: The Selection Process for CGL Exam comprises of Tier-1 Exam, Tier-2 and Tier-3 (Skill test for Few posts only. But SSC had done, the biggest change by abolishing the Interviews , as we have in Tier-3. Here is the Detailed SSC CGL 2016 Syllabus  and these areBest Books for CGL 2016 Exam

On 13th Nov, 2015, SSC had announced its examination calendar for the year 2016-17. As per the Calendar, CGL 2016 Tier-1 Exam is tentatively scheduled on 8th May and 22nd May, 2016The Notification or Advertisement will be released on 13th Feb, 2016. Although there is still suspense whether the CGL 2016 will be an online Exam Or offline exam and things will get clear only when the SSC CGL 2016 Notification will be announced.If you apply for SSC Exams other than CGL, then you should also check the Official SSC Exam Calendar 2016 to know the dates of other SSC Exam in 2016.Now, you know the Exam is scheduled in May, 2016, therefore its high time, that you start your preparation by going through the SSC CGL Syllabus and most importantly read these Books for SSC CGL Exam 2016 to crack the exam in first attemptApplicants are also advised not to wait for the Last days for submitting the online application, and apply early, as during the last days the website may be heavy or non-responsive due to heavy traffic and as such apply well before the SSC CGL 2016 Last Date ie 14th March, 2016

How to get the SSC CGL Notification ?

You can obtain the SSC CGL 2016 Notification, in two ways: either Online from the Official SSC Website of SSC OR Offline from the Employment News Paper.1) From SSC's Website: If you have a smartphone, Laptop Or PC, then this is the most convenient way to get the SSC CGL Notification. SSC had made a special page named "Notices"  on its Website, and you can download the PDF from this page and save it for future references2) From Employment Newspaper: Employment Newspaper is one of few the Newspapers in India, with high readership. Its a weekly newspaper and it contains collection of Govt Jobs. Apart from the Official Website, SSC will publish the Detailed Advertisement in the Employment Newspaper. All the SSC Notices and Exam Notifications are published in this Newspaper. It is available at an affordable price of only Rs 8/- (Now Rs 12/-)3) SSC CGL 2016 Website:  We have made this website, to provide you Details on each and every aspect of SSC CGL Exam 2016. Once the Official Notification is Out., we will made the same available on this page.

What After the CGL 2016 Notification ?

As SSC CGL Notification 2016 is out, the next big thing, is to apply online for the exam and fill your CGL 2016 form before the last date ie 10th March, 2016. Carefully fill the form, otherwise you may face, difficulties in the later stages of the examination. To help applicants, correctly filling the Application form, we have written a Detailed post on submitting SSC CGL 2016 Application form online , so that you didn't face any difficulty at the time of online registration Once the form gets filled up, gear up you Exam Preparation and start to prepare early for this exam, as it will help you in the long run, and to boost your preparation, you should study these Books for CGL Tier-1 Exam