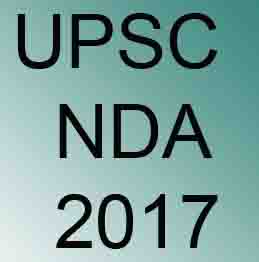 UPSC NDA & NA (II) Notification 2017 – Apply Online for 390 Defence & Naval Academy Posts:
Union Public Service Commission (UPSC) has published notification to conduct National Defence Academy (NDA) & Naval Academy (NA) (II) Examination 2017 for admission to the Army, Navy and Air Force wings of the NDA for the 140th Course and for the 102nd Indian Naval Academy Course (INAC) commencing from 02-07-2018. Eligible unmarried male candidates may apply online from 07-06-2017 to 30-06-2017 till 06:00 P.M. Other details like age limit, educational qualification, selection process, how to apply are given below…

Instructions for Applying Online:
1. Before applying online candidates should scan the copies of photograph and signature.
2. Log on to the website www.upsconline.nic.in.
3. Click on “Online Application for Various Examinations of UPSC”.
4. Select the desired post & fill the Part I Online Application form by selecting the link.
5. Fill all the mandatory details and Submit.
6. After successful submission, an unique Registration ID will be generated, note it.
7. Make the fee payment and revisit the website.
8. Select Part II Registration and Log in yourself.
9. Fill all the mandatory details in Part II of Application.
10. After submitting the application form, take print out of system generated application form for further reference

For more details like scheme of examination, physical standards and other information click on the link given below…